With the rapid growth and subsequent shifting of the city’s centre, Ahmedabad has an increasing demand of residential apartments in the relatively newer parts of the city. TP apartment is located in one of these newly constructed buildings. It is a 4 bedroom home for a family of 6, migrating from their eastern home to the suburban development in the west.

The apartment came complete with a marble and vitrified tile flooring, fully functional bathrooms and an unfurnished kitchen, like most ‘ready to live’ apartment buildings in recent times. The challenge with the interior was to then complete it in a manner that feels one with the existing finishes, while adding a personality to the space that resonates with the family.

The house is finished in colours of sand with a stucco texture on the walls, sandstone panels, oak and teakwood furniture along with a touch of green marble to bring a contrast to the palette. The living room is detailed with a custom light element consisting of concentric brass members holding handmade glass globes that light up the space evenly, allowing for the elimination of any other ceiling mounted light fitting in the space. The family sitting area is screened from the entrance visually by a fabric screen suspended from brass hooks in the ceiling. This area consists of more informal furniture with green marble coffee table tops, the same green that also continues onto the custom designed dining table.

The sand coloured hues continue into the each of the 4 bedrooms, accompanied with an element, material and colour that emphasises its relationship with the occupant of the room. The master bedroom forms a pocket of space for the dressing area, consisting of an organically shaped marble backed mirror, that catches ones eye as soon as one enters the room. The room is further detailed with a floating wardrobe that forms a negative space underneath adding a certain dynamism to the otherwise cuboidal mass. A chiseled chunk of sandstone acts as the side table for the bed, while the carved sandstone panels mounted on the wall above the bed become the ‘permanent’ artwork appearing as though it is carved out of the wall itself.

The parents’ bedroom has an array of carved sandstone panels, that fill the void in the wall formed by a beam-column junction. The room is finished with a tone that matches the sandstone exactly, unifying the space to appear monolithic. In the daughter’s bedroom, the given height has been maximised by avoiding creating a false ceiling. The room’s ceiling is bordered with a stepped detail, parts of which are structural beams and others which are created to match the beam levels. The fourth bedroom has a fluted bed back panelling which wraps onto one of the wardrobes, exaggerating the introduced plane, in the otherwise stucco finished space. 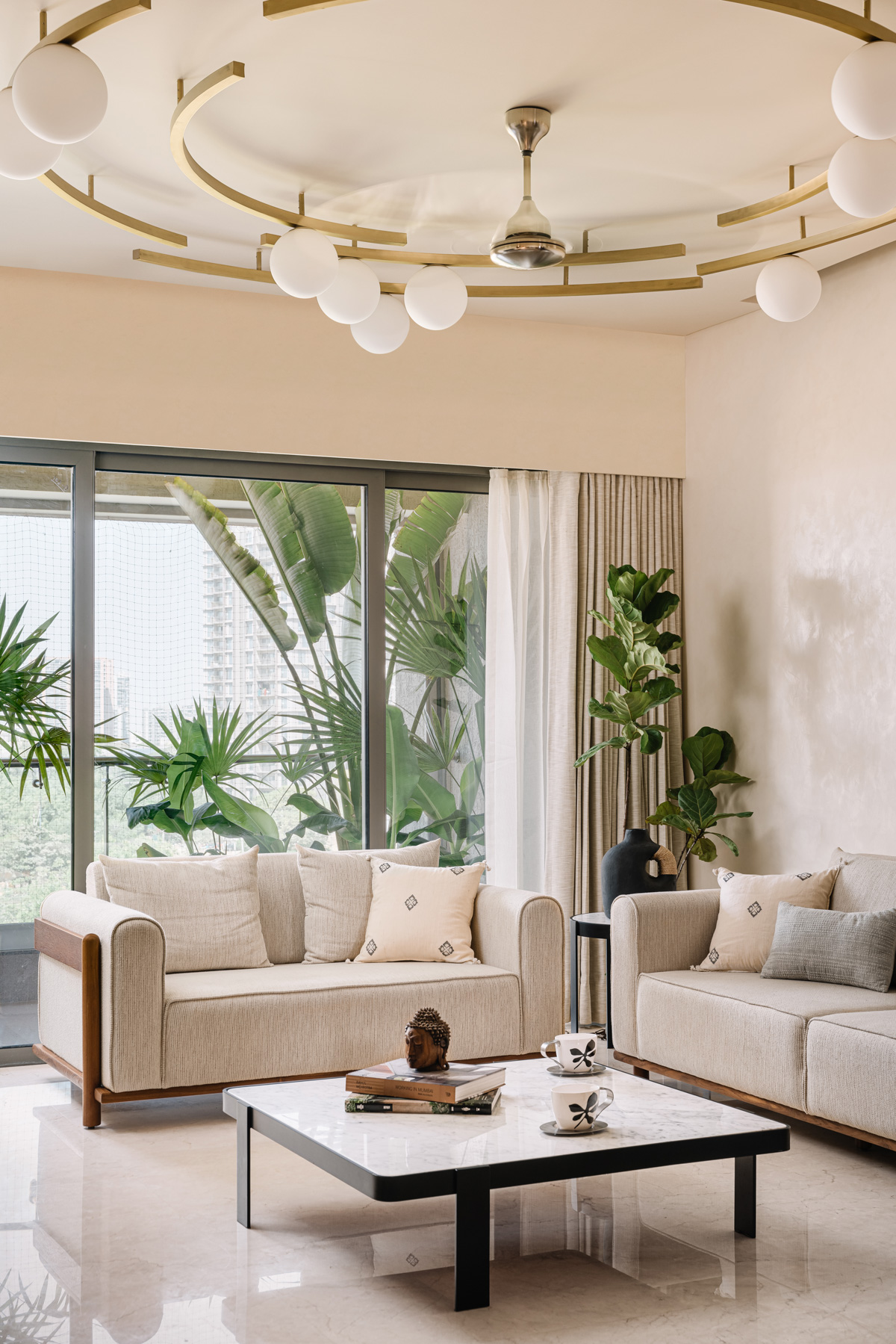 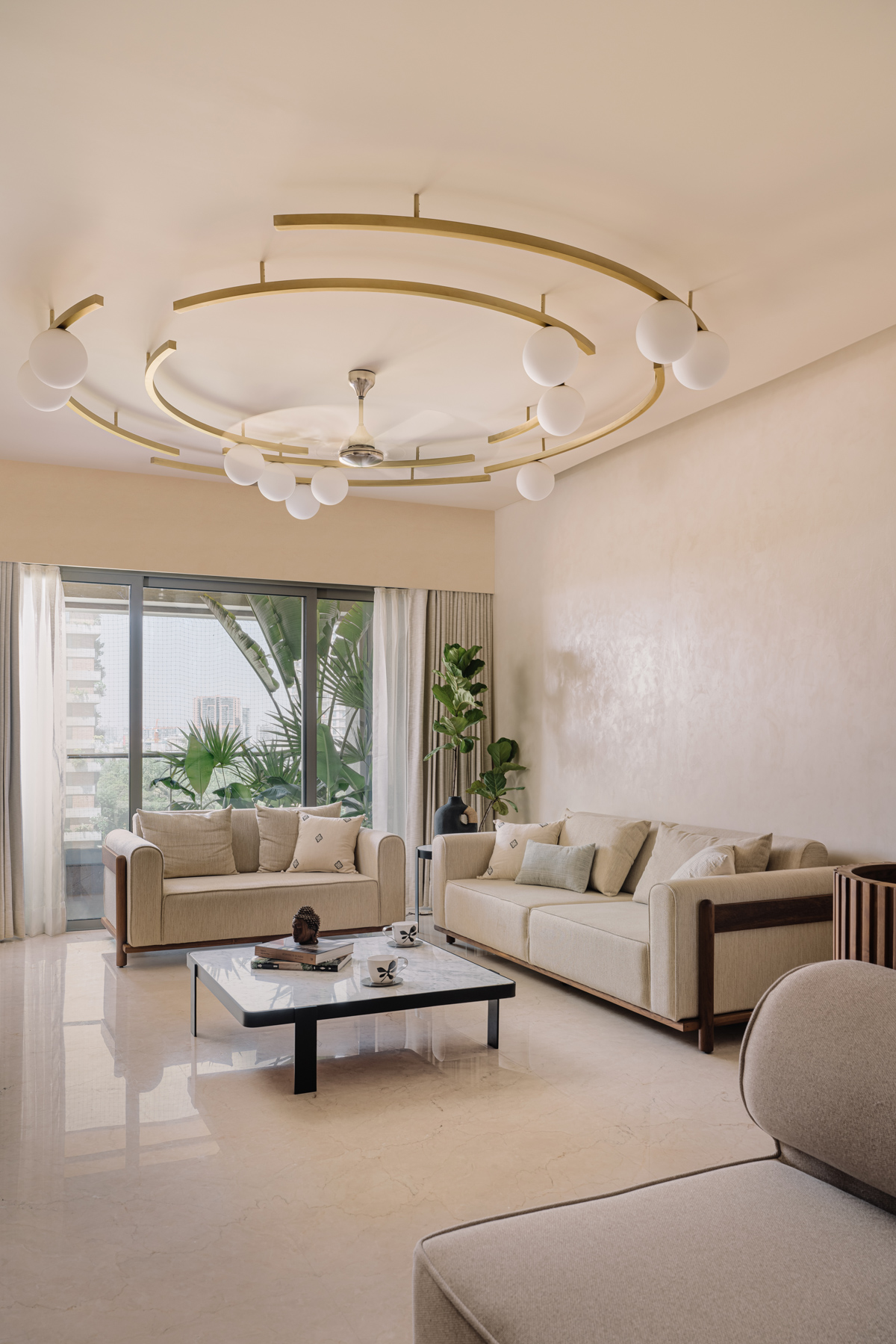 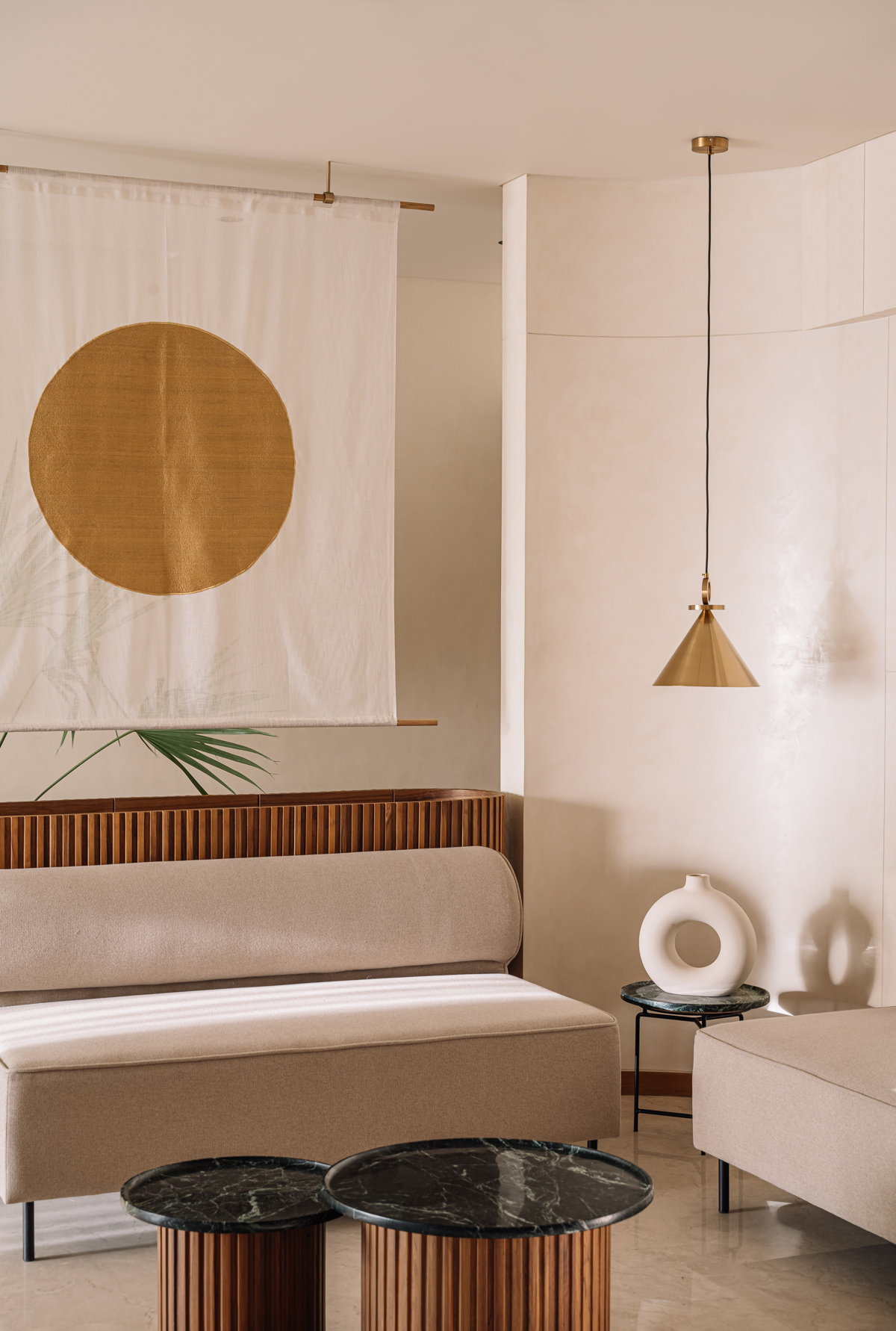 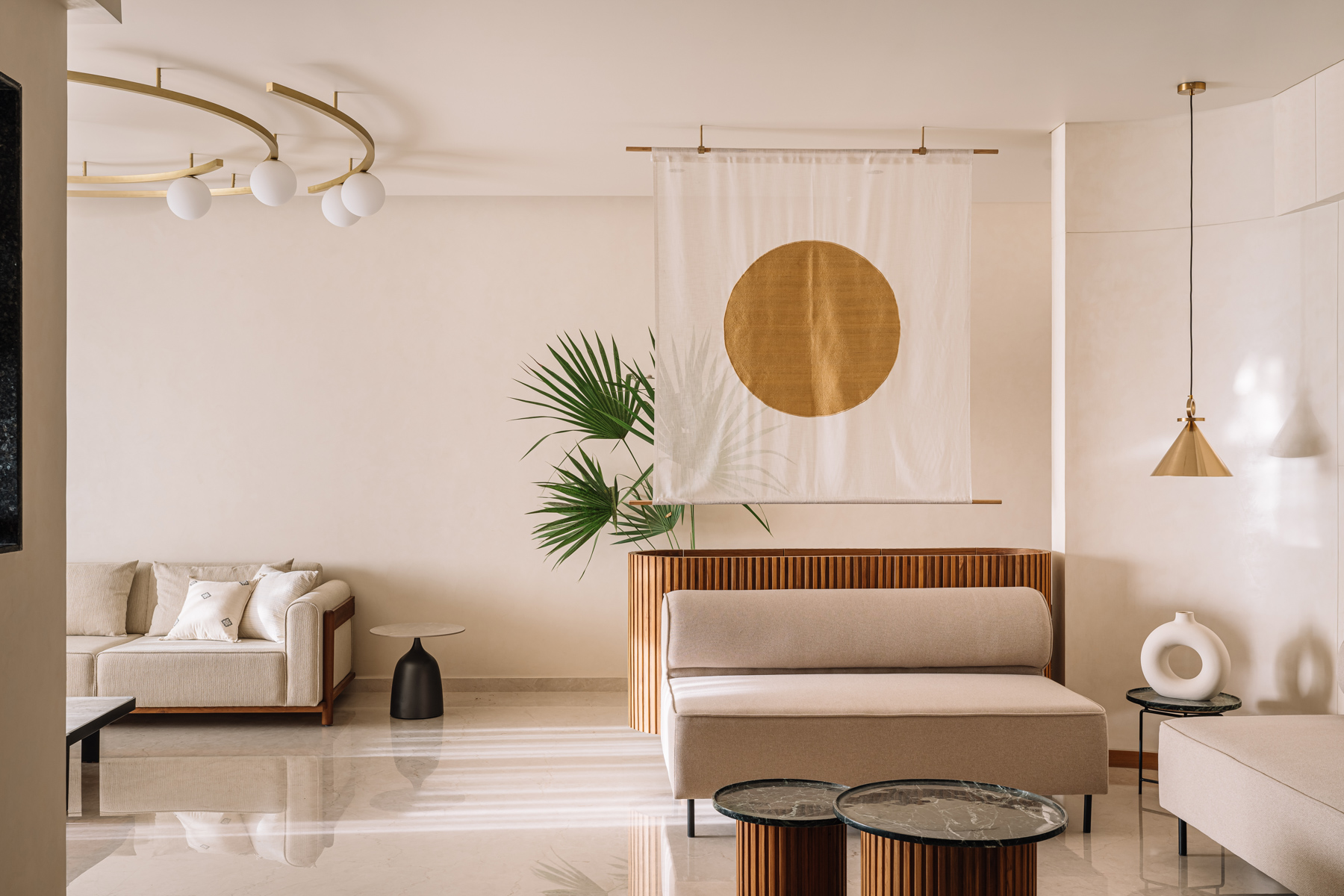 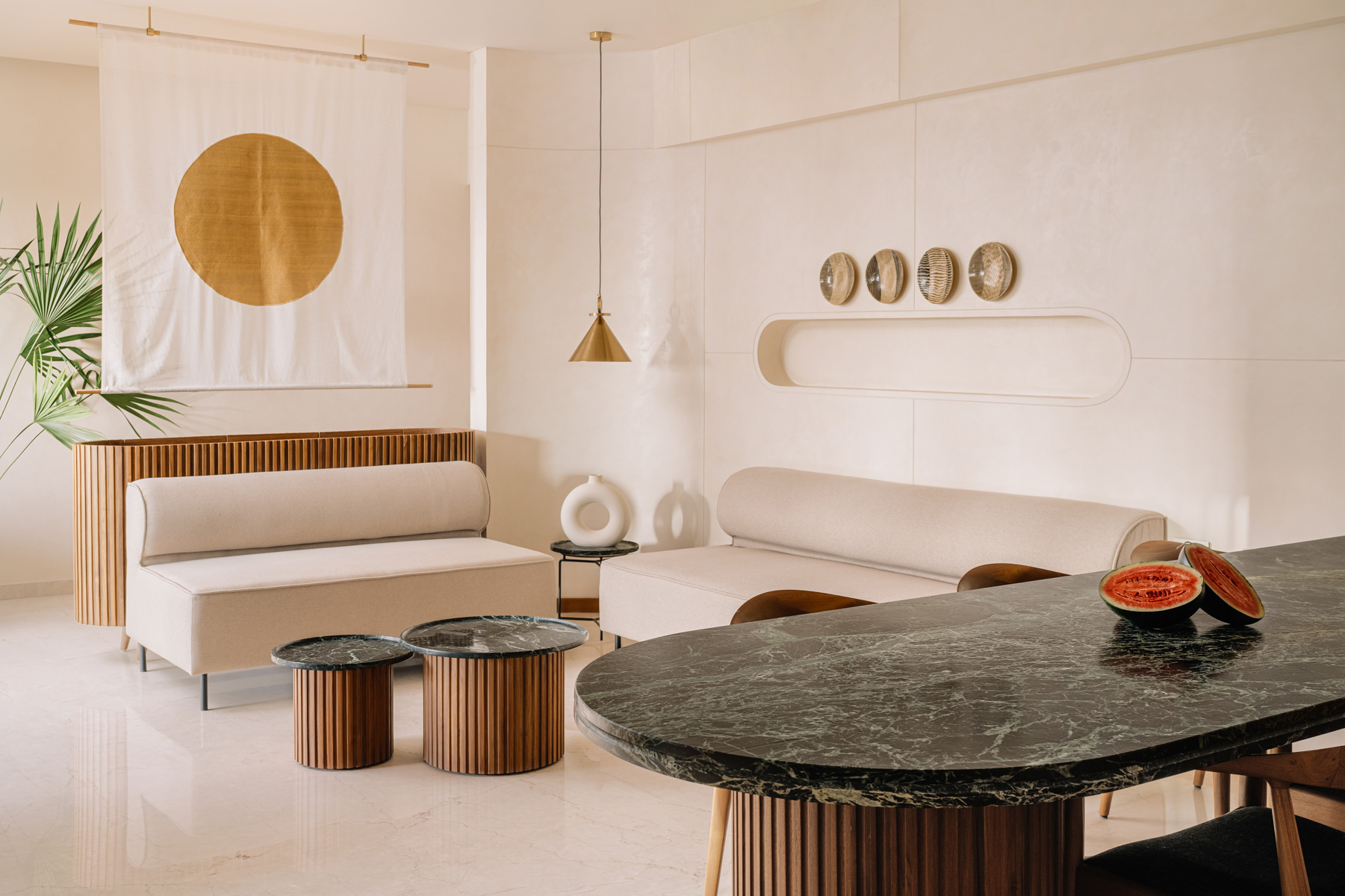 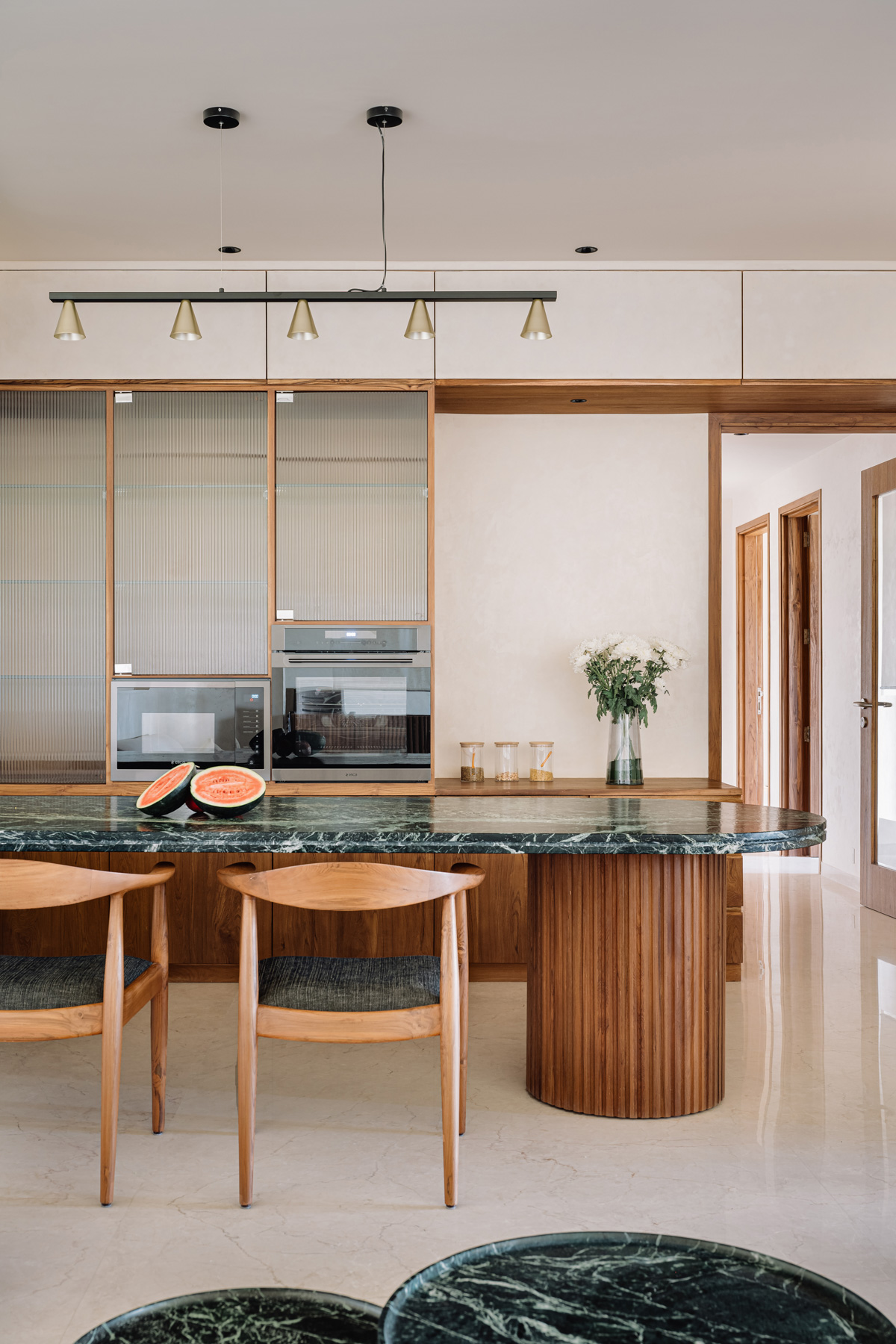 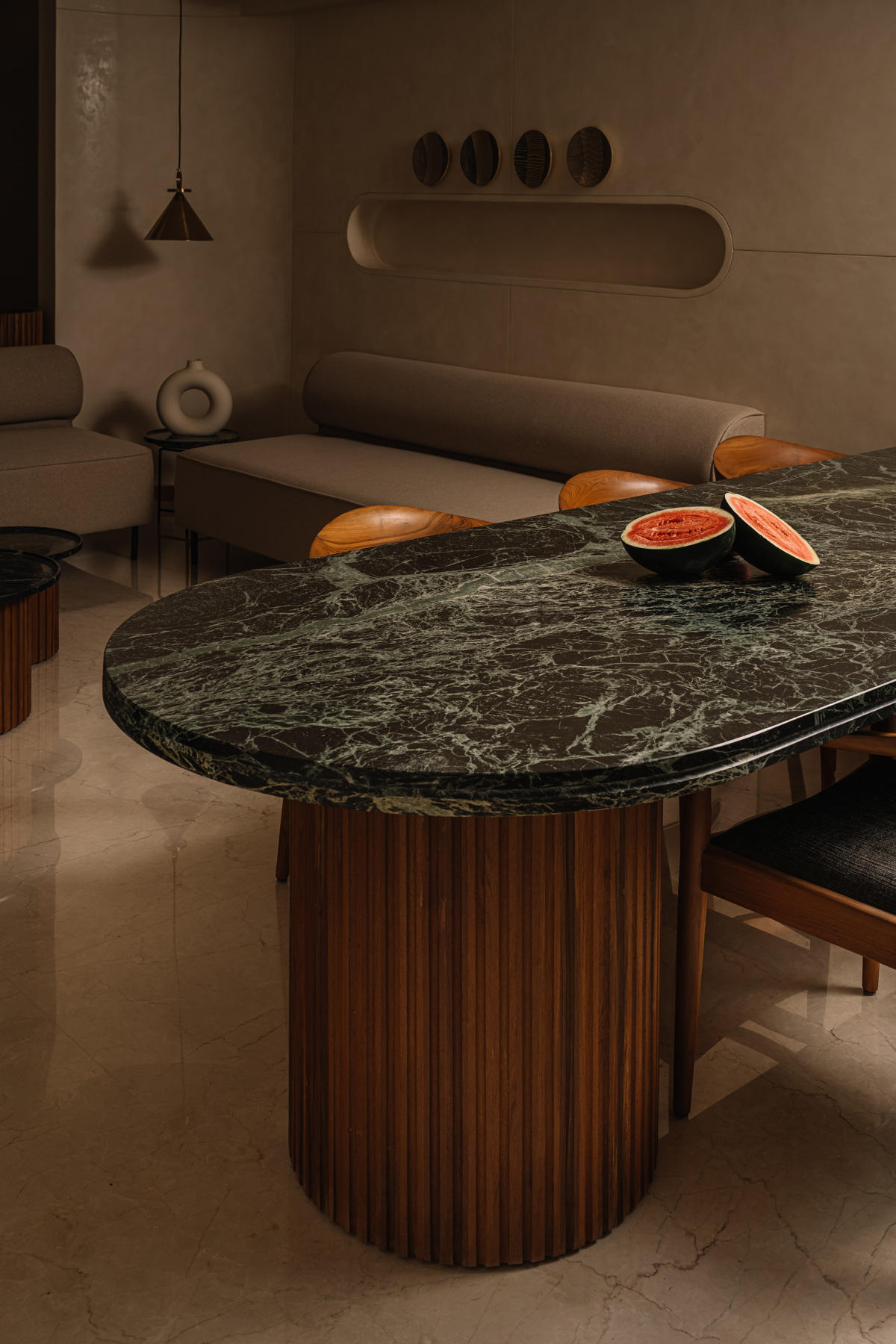 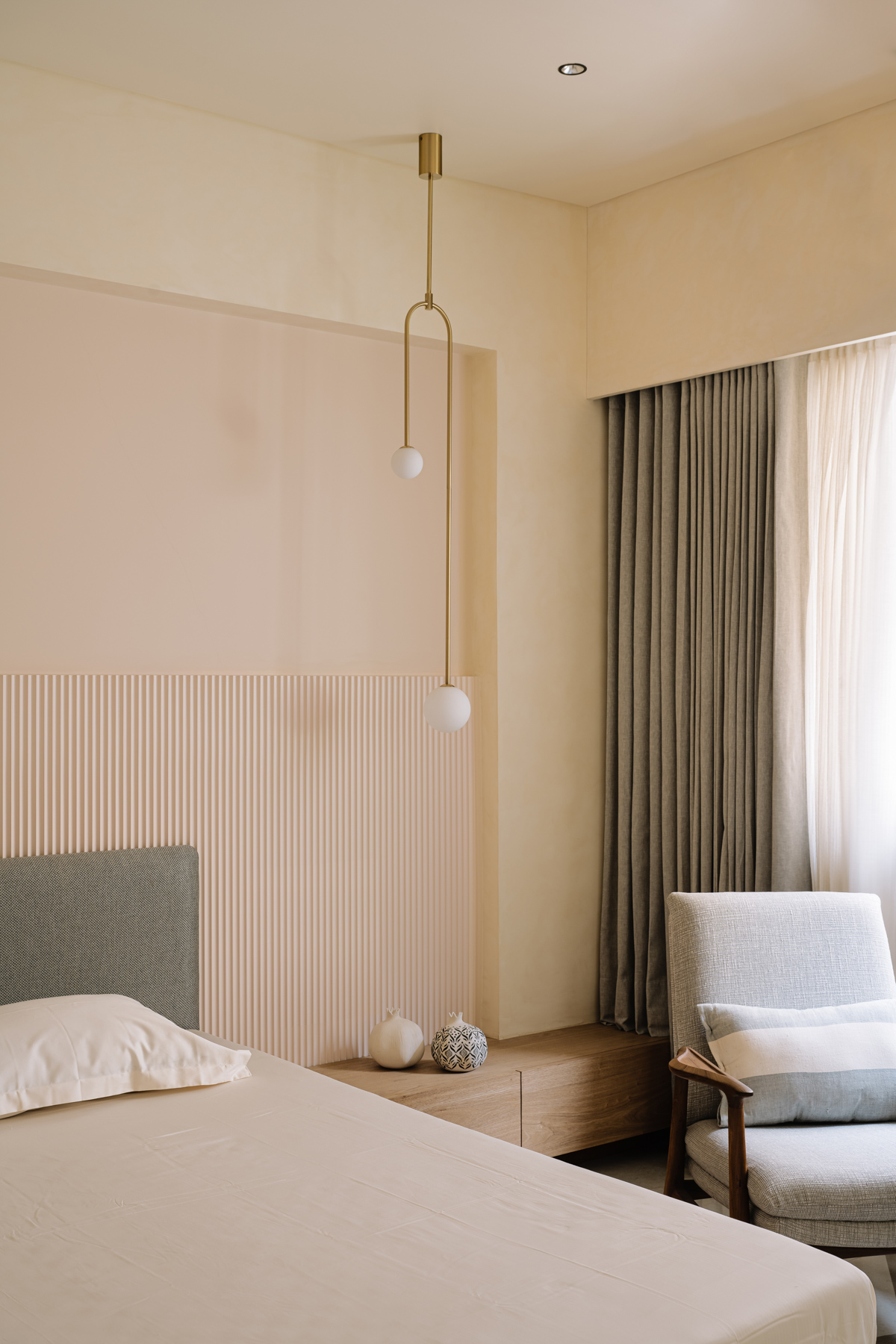 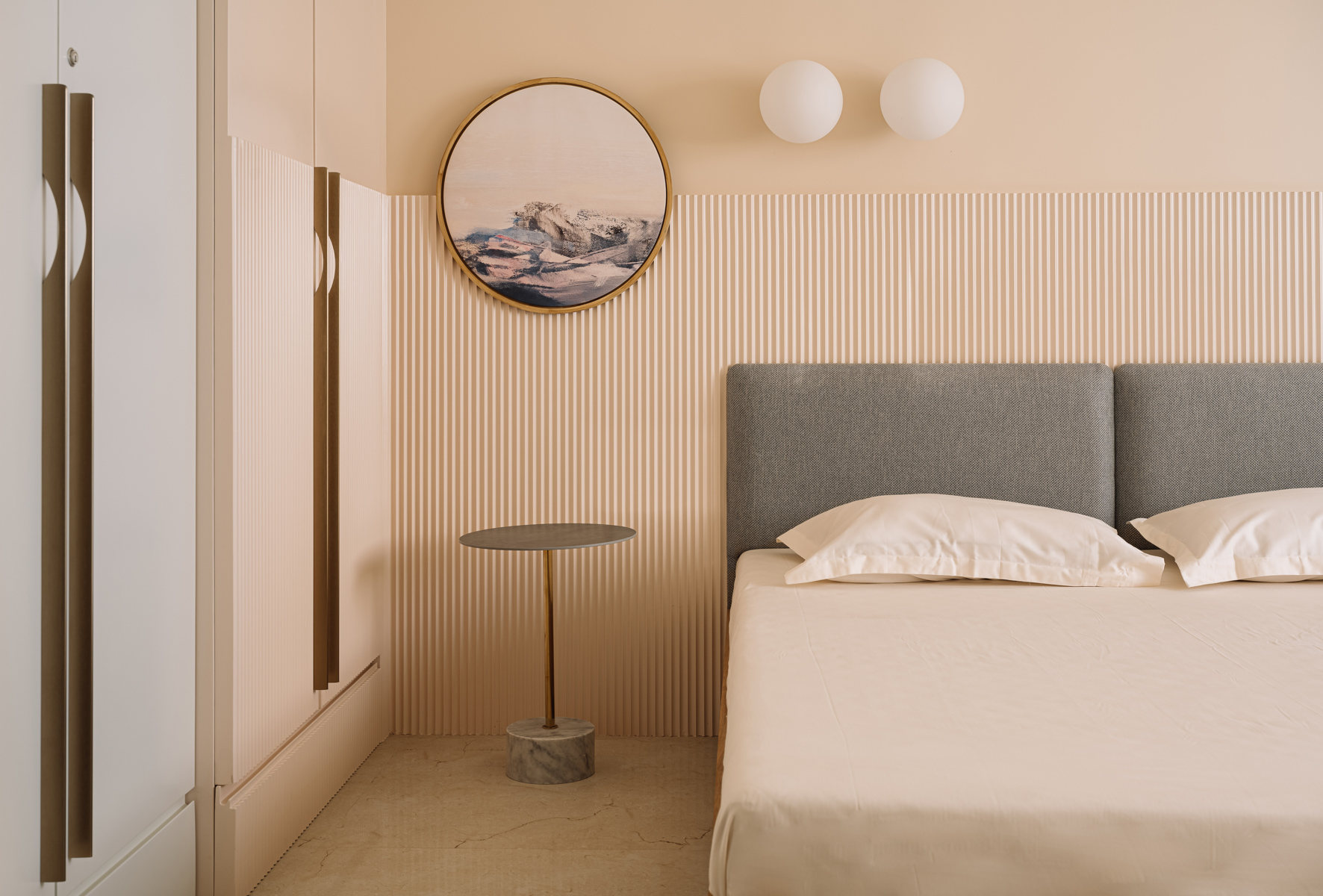 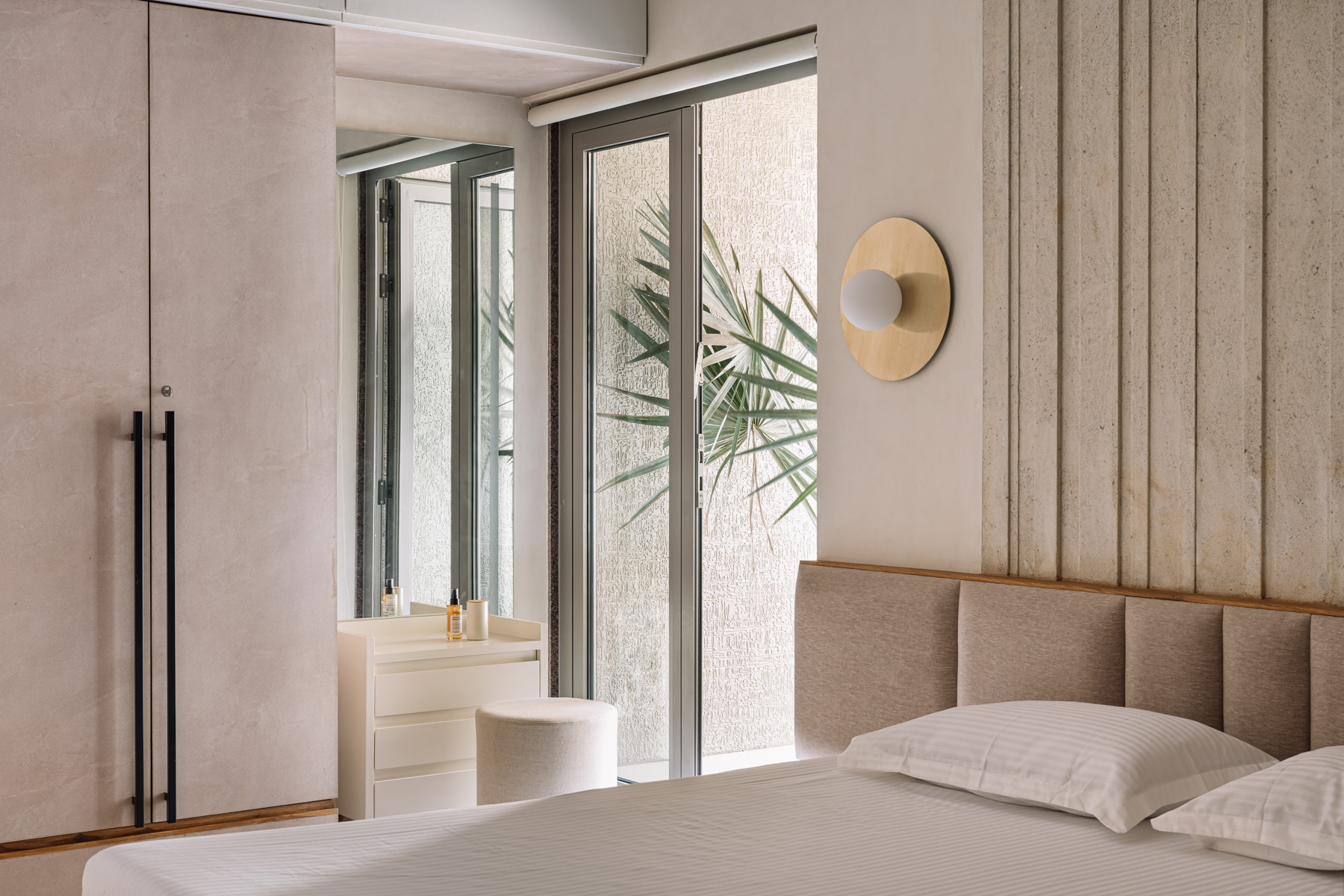 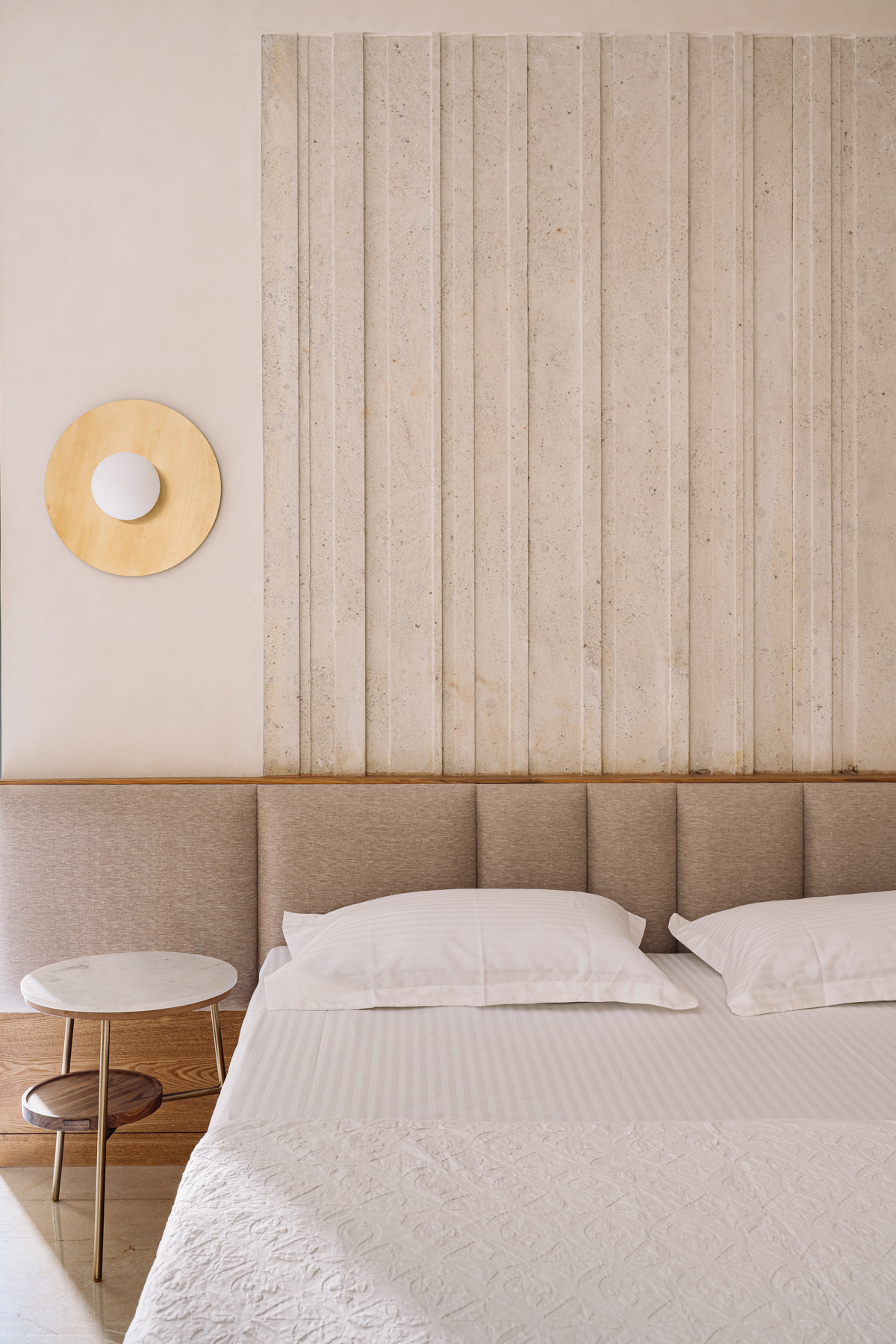 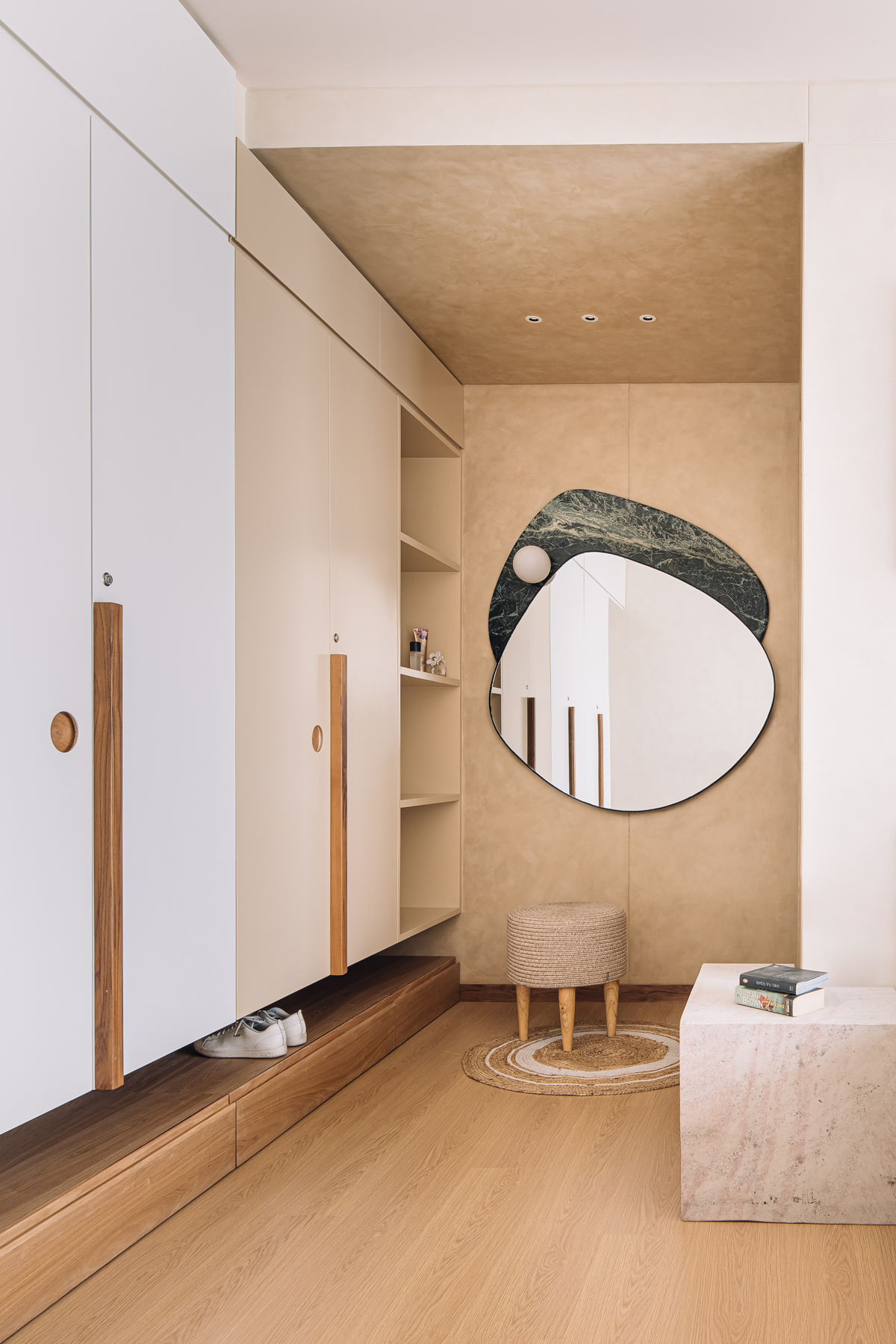 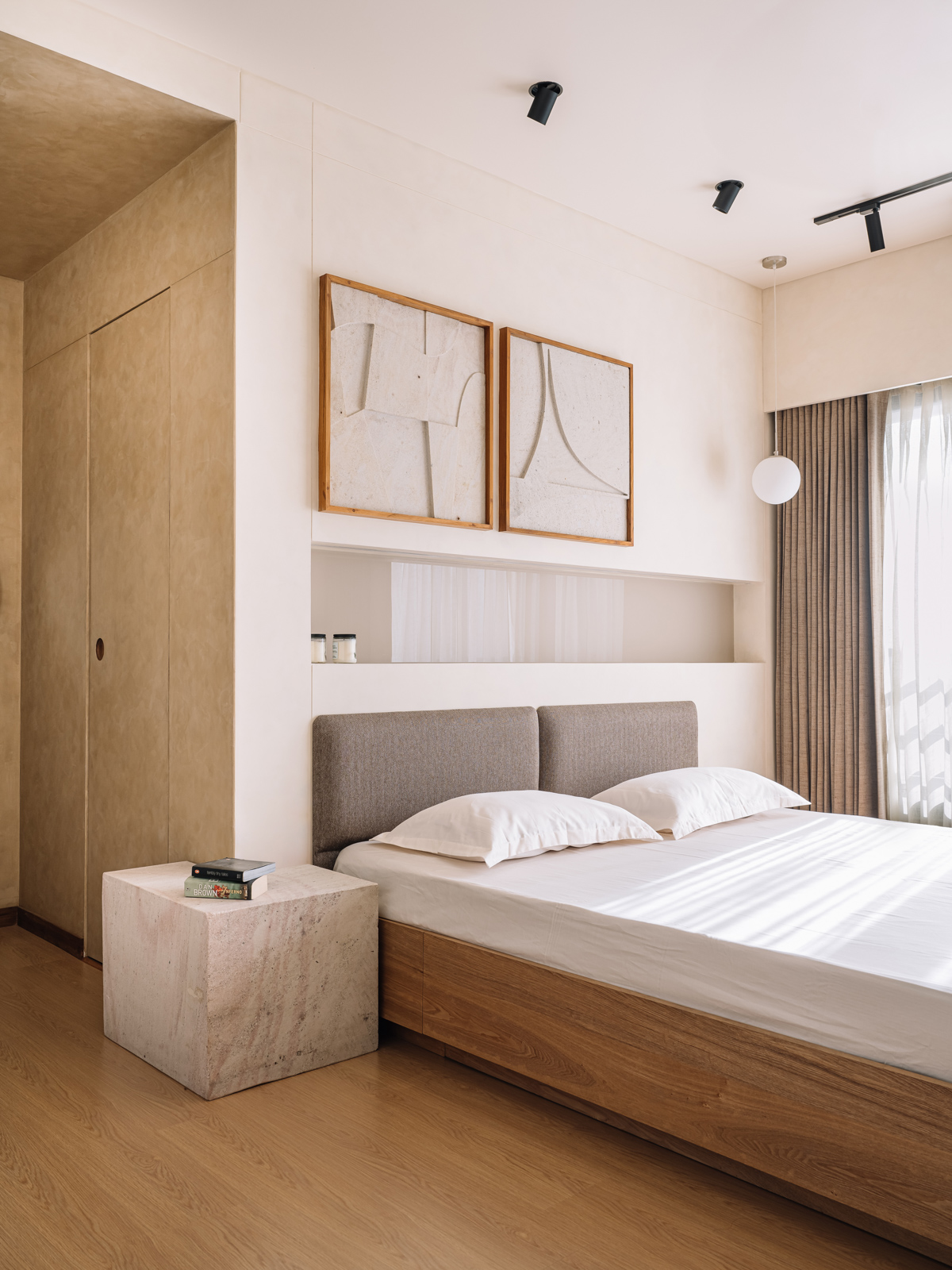 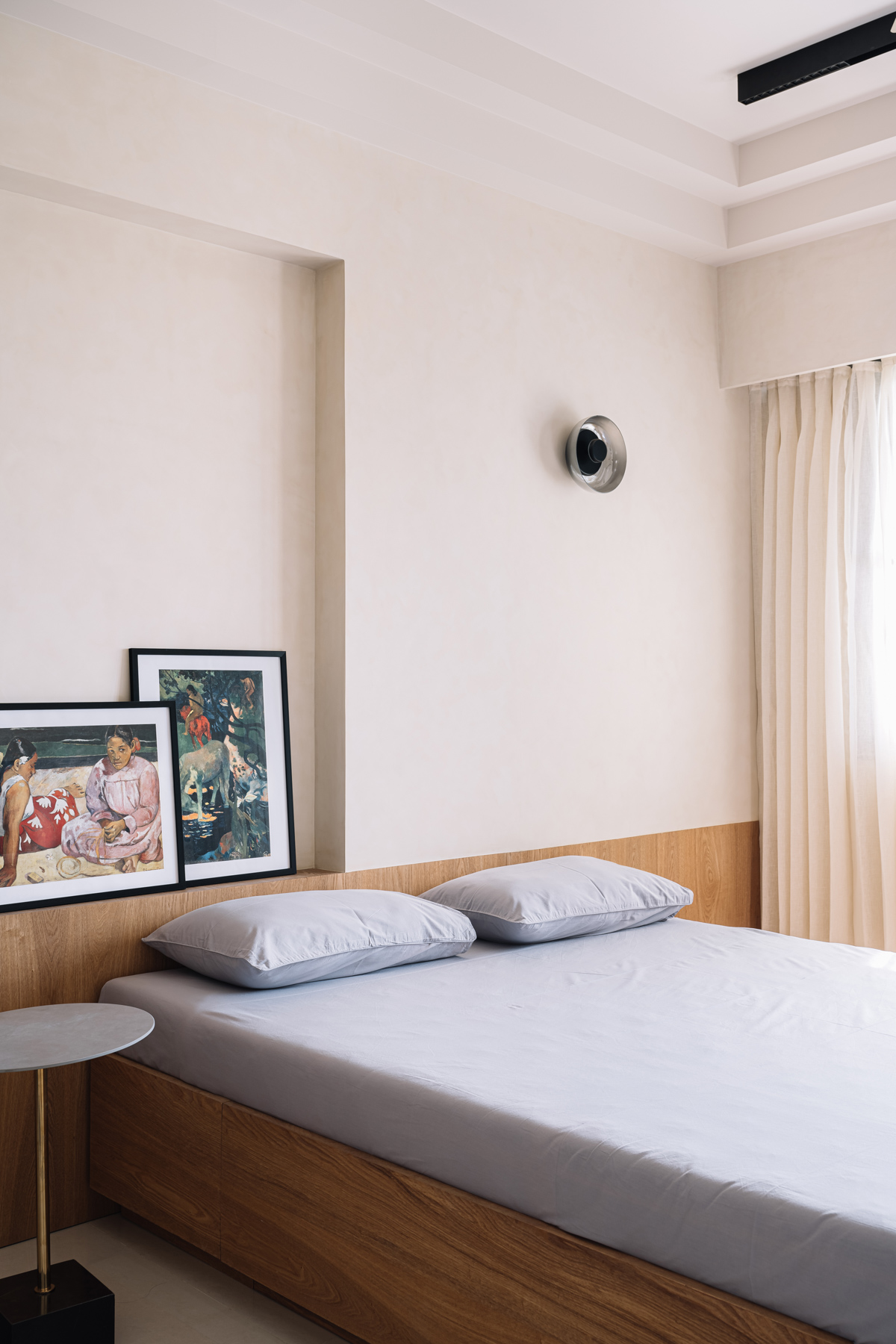